Leaving World of Birds we took the trails past marsh enclosures with various birds; ducks and cranes.  Just past these marshes lead as to the north end of Astor Court.  At the heart of the Zoo is Astor Court, containing beautiful manicured lawns, six neoclassical structures circa 1900 most designed by Heins & La Farge.  At the south end of Astor Court stands Rainey Gate, in the middle lies the sea-lion grotto pool, to the farthest north is the Rockefeller Fountain and on either sides stand the numerous old buildings from the Zoo’s beginnings; Lion House, Monkey House & Elephant House. 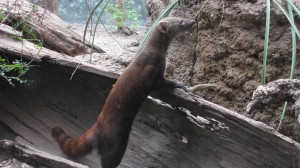 It is here at the heart of the zoo where you find Madagascar, in the old Lion House, which first opened in June 2008 and is one of the Bronx Zoo’s newest exhibits.  This state of the art exhibit has skylights to provide UV for the plant & animal inhabitants.  From New York’s Astor Court you enter this old building and are transported to another world of rich habitats with charismatic lemurs, rare tortoises and the elusive fossa.  Your first meeting is with the Coquerel’s sifaka with gangly limbs and large saucer-like eyes looking back at you with equalled curiosity.

Passing the large, ominous cave crocodiles of Madagascar in their dark cave, one at rest on land and the other with its mouth agape underwater eyeing me or the fish it shares its waters with I wasn’t sure.  Past the cave lies an amazing enclosure full of the wonders of the island.  The enclosure runs along the path through the building and is home to enormous baobab trees, ring-tailed lemurs, collared lemurs, exotic birds and radiated tortoises, red-ruffed lemurs and ring-tailed mongoose also share the enclosure but are sectioned off with wire mesh in between. This gives the effect of a continuous enclosure for the visitor, a full experience of the spiny forests of Madagascar, but allows safety as well as enrichment for the animals.

Opposite the spiny forest enclosure is one of a darker nature housing the fossa.  Svelte, alert and cat-like the elegant fossa is actually part of the mongoose family and is the largest predator species on the island of Madagascar – other than humans.