From the African Plains of Kesho Park you venture down the long, steep hill to the Canadian Domain.  With the new Tundra Trek exhibit many of the animals that were once found in the Canadian Domain can now be found there and over the next few years the rest will follow.  But for now down in the belly of the Toronto Zoo, where you feel more surrounded by the Rouge Valley than anywhere else in the zoo, you can still find beautiful cats like the lynx and cougar as well as strong, iconic Canadian mammals like the grizzly bear, moose and wood bison.

After burning off your lunch as you struggle back up the hill, out of the Canadian Domain, taking the wooded path that envelops you in the Rouge Valley, you soon enter the Americas region of the zoo.  The Americas region of the zoo covers animals from North and South America, with vast differences in climate you’ll find animals from the frigid north to those basking in the moist heat of the south.  Before heading into the Americas Pavilion you have the opportunity in the warmer months to see marmosets, tamarins and saki monkeys popping in and out of their outdoor enclosures that are linked to their indoor ones.  Also just outside the Pavilion is the North American river otters who are either swimming in their pond, that can also be viewed from inside the Pavilion, or dozing  in the shade.  On this visit from inside the Pavilion I watched as one of the playful otters swam in a circle as a large snapping turtle swam on the opposite side of the glass in the next pond.  Next door is the beaver enclosure, which, with all my visits over the years, I’ve rarely seen them out and exploring their yard.  Usually you’re able to glimpse the family in their den which has an amazing porthole that can be viewed from within the Americas Pavilion, a great opportunity for visitors to peek into the hidden life of the beaver’s dam.

Within the walls of the Americas Pavilion you’ll find everything from the cute to the scary and the plentiful to the critically endangered.  In what appears to be the primate wing of the Pavilion the enclosures run from smallest to largest, starting with the smallest monkey in the world, the pygmy marmoset, to the white-faced saki monkey.  These multi-species enclosures include primates, sloths and ground dwelling birds.  The second enclosure houses common marmosets who at the time of our visit had two young ones, approximately two months old.  One safely travelled with the mother while the other, obviously more adventurous, was wandering along alone and found its way to one of the nest boxes.  Sitting in the entrance it appeared to suddenly realize it was separated from its mother and began chirping and looking around from the safety of the nest box.  After hearing its cries mom came to the rescue, where cuddles were immediately in order.  Next were the stunningly beautiful golden-lion tamarins.  Numbers in the wild were once dramatically low at 100 to 200 individuals due largely to habitat fragmentation as well as the pet trade.  But with the help of various zoos and conservation organizations numbers have now increased to approximately 1500 individuals.

Another critically endangered mammal that can be found in the Americas Pavilion is the black-footed ferret.  Usually curled up in its den these nocturnal predators have their enclosure right next to their natural prey, the prairie dog.  This endangered species was once on the brink of extinction, but with the concerted determination of wildlife specialists in the United States and various zoos including the Toronto Zoo, they are now back on the prairies of not only the United States but also here in Canada.  The Toronto Zoo has been dedicated to aiding the black-footed ferret since 1992 and has produced hundreds of kits (young ferrets) for reintroduction into the wilds of various United States as well as one site in Canada. 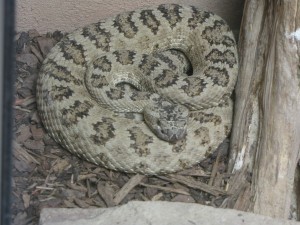 Also inside the Americas Pavilion you’ll find various birds, fish, arachnids and many reptiles and amphibians.  One of the most attractive snakes can be found here, the petite and slender yet lethal bright yellow eyelash viper.  With their namesake scales protruding over their eyes these brilliantly coloured snakes are the smallest poisonous snakes, at approximately 2 1/2′, found in the rainforests of Central America.  Eyelash vipers come in a plethora of colours from yellow to green and even red.  The world’s only venomous lizards, found in southern United States and Mexico, the gila monster and the Mexican beaded lizard also find the Americas Pavilion home.  The last enclosure in the Pavilion houses the Eastern Massasauga rattlesnake.  Found in southern Ontario and nine northeastern U.S. states, these rattlesnakes are threatened with extinction due to loss of habitat and sadly indiscriminate killings.  The Toronto Zoo is trying to educate the public through workshops about living with rattlesnakes and hopefully bring awareness to their vital role in their ecosystem.  Following this enclosure is an interesting exhibit showcasing how snakes see, using an infrared camera that visitors can walk in front of and see themselves on a video screen through the eyes of a snake, a great educational display for adults and children.

Down the path from the Americas Pavilion is a spectacular exhibit that transports you to the rainforests of Central and South America with a large waterfall that visitors can even walk behind.  Here you’ll see a flock of pretty in pink flamingos and a family of black-handed spider monkeys who at the time of our visit had a young one, seven month old, who was named Poppy after being born on Remembrance Day the previous year.  Next door, in what appears as a ruined Mayan temple are a pair of jaguars, one with a golden coat with large rosettes (spots) and the other with a coat shrouded in darkness.  Many people assume that black cats are panthers, but the truth is there is no such thing as a “black panther”.  The name panther actually comes from the genus name for all big cats – Panthera.  Black cats are either leopards or in this instance jaguars.  The melanistic coat (all black colouring) is a genetic mutation where the coat lacks the colour pigment, though hard to see they still have their rosettes.  This misnomer is similar to white tigers where people think white tigers are a separate species, but all white tigers are Bengal tigers, as with black jaguars they just lack the colour gene.

The Tundra Trek is one of the newest exhibits at the Toronto Zoo and this ten-acre award-winning exhibit is home to various Arctic species, from the largest land carnivore, the polar bear, to the snowy owl and the sometimes white Arctic fox to the always white Arctic wolf.  The Tundra Trek is home to a state of the art polar bear enclosure with rolling grassy hills, large rocks and a large swimming pool with underwater viewing.  Here you’ll meet three adult polar bears who were rescued as cubs, Inukshuk, Aurora and Nikita, as well as Aurora’s new cub, Hudson, who is blooming under the care of zoo staff.

Every time I visit the Arctic wolf pack I always recall a few years back, while still in the Canadian Domain, I visited them early in the morning and had the opportunity to hear them howl.  It was the first time I had heard a wolf pack howl and it was transcendent and tears welled up in my eyes.  To me it was a prime example of how the beauty of wildlife can affect us.

3 thoughts on “From the Americas to the Tundra”