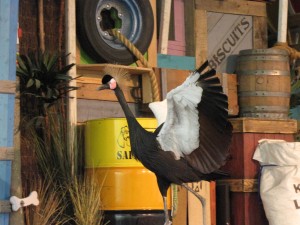 Our last adventure at the Columbus Zoo was watching their show, Animals on Safari, which was full of light comedy, animal antics, fun animal facts and animals showing off some of their amazing abilities.  The high energy and fast pace execution helps to keep kids and adults alike interested and entertained.  The stage is set up like a safari camp with a full facade of tents, a jeep, signs and various doors and windows as well as hidden ins and outs, things to climb on and all the fixings to put on  a proper animal act.

The show contains a wide array of animals including everyday pets like cats and dogs.  These cats and dogs, over a hundred of them, had been rescued by the Columbus Zoo from local shelters and given a better home at the zoo and a better life full of fun by taking part in the Zoo’s Animals on Safari show.  The show was performed as a mock safari television show with staff acting out different parts like vet and trainer.  For animal lovers the show is full of hilarity as you watch cats and dogs, miniature pigs and barnyard ducks, rats and a groundhog as well as a skunk parade and race across the stage or up and over obstacles.  Not only are there every day animals in the show but also rare and endangered ones like an Iberian lynx, an African crowned crane, a binturong and a black and white lemur.  The show offers a rare opportunity for visitors to observe animals, rare or common, perform some of their unique and interesting behaviours, like ferrets scurrying up ropes with a body that looks like an inch worm.  Animals on Safari also educates the public on not only the need for adoption from local pet shelters but also conservation issues like the loss of habitat for the critically endangered Iberian lynx, as well as rectifying old myths when their African crested porcupine shuffles across the stage, in that porcupines do not shoot their quills but shake them loose.  I’m always excited to see a show while visiting zoos as I feel they afford a great venue for educating visitors as well as providing another opportunity to create a connection between visitors and individual animals.

Thinking are day at the zoo was complete we headed for the exit.  To our astonishment and thrill the Columbus Zoo had one more surprise for us.  Just before the gates there was a handful of zoo staff all with a different animal for the public to get up close to and even touch.  These animals weren’t your average cute and cuddly ones; there was a snake, a cockroach, a saw wheat owl, an armadillo, a groundhog and an opossom.  Some of these animals were not new to me, I’d worked with some of them before, but others like the opossom with its wide eyed gaze and course hair excited me especially to realize how large they are.

In all I was impressed with the Columbus Zoo, it was well laid out, enclosures mirrored natural habitats and it allowed a varied array of ways for the public to interact with animals, their surroundings and be not only entertained but more importantly educated.  Each exhibit was rich in atmosphere, really encompassing the feel of its region making for a real sense of adventure, as if you were actually travelling to that specific destination.