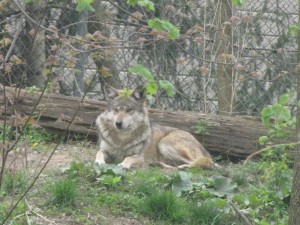 The North America region of the Columbus Zoo is the largest and oldest part of the zoo.  This region, like many others at the zoo, give an authentic atmosphere as you are surrounded by woodlands, traveling dirt paths to rustic buildings resembling log cabins, with all of the enclosures accurately representing each animals native habitat.  Some of the animals you’ll find here are; black and brown bears, a pronghorn herd relaxing on a grassy hill, a lynx almost perfectly camouflaged amongst the brush, cougars dozing in hollowed out trees and in a large enclosure with a massive nest high up in the trees and a small waterfall feature below you can see Americas emblem, the majestic bald eagle perched high atop a sturdy branch.

Just past the eagle in the North American river otter enclosure with underwater viewing which is a perfect way to watch these energetic animals literally play in the water, then up and out on land slinking along with their long slender bodies and then back into the water to swim by like mini torpedoes.

Another beautiful feature of the North American exhibit is a 10,000 square foot aviary, home to over 40 species of migratory songbirds.  Walking through this exhibit is tranquil with different types of trees to peer into in search of one of the attractive songbirds like cardinals, jays, waxwings, tanagers, warblers and the classic robin.  This aviary serves as a rehabilitation facility to native birds as well as being a tribute to renowned conservationist Rachel Carson.

One of the big attractions for me in the North American exhibit was the Mexican wolves.  In a large enclosure at the entrance into the exhibit is home to a pack of Mexican wolves, the smallest subspecies of the gray wolf.  Though once ranging from the Sonoran Desert of Mexico to Texas and Arizona, the Mexican gray wolf was eliminated in the wild due to a loss of their natural prey as well as from trappers, being shot and poisoned.  Today there are an estimated 340 Mexican wolves surviving in 49 facilities in Mexico and the United States.  Columbus Zoo is one such facility that runs a breeding program with the goal of having a population of 100 living in what was once their native home range.  Since 1992 there have been 29 successful pups born, just another great achievement from a zoological park in the hopes to reintroduce and regain a lost population of wild animals.

A recent accomplishment for the Columbus Zoo is the opening, in May 2010, of their Polar Frontier exhibit.  The star enclosure is the 1.3 acre yard with two pools, one being 167,000 gallons with an underwater viewing area for visitors, full of large rocks, lush grass, trees and dens, all for the zoos two polar bears.  But for us the stars of this exhibit weren’t the polar bears who were relaxing on their hefty rocks overlooking their pool, it was their neighbours.  Next to the polar bears was another large enclosure with a waterfall flowing into a huge pool, also with underwater viewing, surrounded by beautiful river rocks and home to Brutus and Buckeye.  Who and what are Brutus and Buckeye?  They’re Columbus Zoo’s brown bear brothers, these teenagers are massive animals weighing about 850lbs and standing 8 feet tall.  At the time of our visit we were fortunate enough to be there for what seemed to obviously be play time.  A crowd quickly materialized around the glass wall separating us from enormous strength pawed with delicate playfulness as Brutus and Buckeye rough housed in the water like typical teenagers.  Standing mostly submerged in the water with only their giant heads and paws above, casually swatting the others opened mouth full of large teeth that appeared to be smiling for the endless camera flashes as the crowd watched on in awe.