Queue the Jaws theme song, add heart pounding excitement and a splash of awe and that’s what you’ll find in the depths of the Dangerous Lagoon at Ripley’s Aquarium of Canada.  The Dangerous Lagoon is the largest exhibit with almost 2.5 million liters, a football field length of glass viewing tunnel and a moving sidewalk through the tunnel that is the longest of its kind in North America.  Ripley’s Aquarium of Canada boast the largest shark collection in North America with 14 species of shark.  You can even opt for an overnight experience and sleep below the sharks in the Dangerous Lagoon’s shark tunnel.

You’ll be immediately drawn into this exhibit, surrounded by large sharks, large fish, smaller schools of fish and all in an underwater experience with no snorkel or diving gear necessary.  Surprisingly one of the first fish that caught my eye was the tarpon.  The tarpon is a long, slender fish at 4 to 8 feet long and weighing 60 to 280 pounds.  These very adaptable fish also take gulps of air from the surface which gives them a short burst of energy. Among the schools of yellowtail snapper and porkfish are moray eels lurking in crevices as well as an illusive green sea turtle who I sadly didn’t see on my visit.  Green sea turtles are endangered and at up to 5′ (1.5m) in length and weighing up to 700lbs (317.5kg) they can live over 80 years.  Like other sea turtles they can’t pull their head into their shell but unlike the others it is the only sea turtle that is a herbivore. 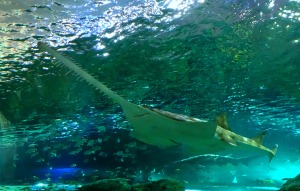 There is so much to look at your neck will be craning this way and that as you watch the diamond-shaped roughtail stingray – that can grow to 8.5′ (2.6m) across and weigh 800lbs (360kg) – casually fly by.  One of the most striking and photogenic is the sawfish especially since they seem to enjoy resting over the crowds on the tunnel’s roof.  With their long, narrow nose extension lined with sharp teeth resembling a saw, they can grow to 23′ (7m) long and are sadly critically endangered due to habitat loss and overfishing.  But with that said, and even with their strange appearance, seeing their ventral side (bottom side) from below they look to be smiling. 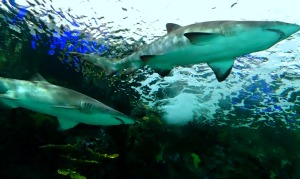 The main attraction in the Dangerous Lagoon is the amazing sharks.  Here you’ll encounter the elegant and graceful nurse shark as well as the sandbar shark.  Probably the most striking shark you’ll meet here is the sand tiger shark.  At 6.5 to 10.5 feet (2-3.2m) in length and weighing 200 to 350 pounds (91-159kg), the sand tiger shark has a menacing appearance with a grinning mouthful of sharp and gnarly teeth.  These threatened sharks are the only sharks known to surface to gulp air that they then store in their stomachs allowing them to float motionless in the water looking for prey. 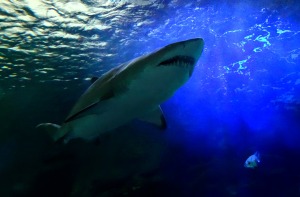 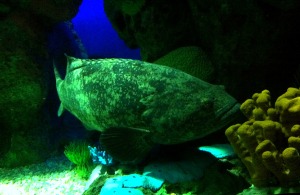 From smart sharks in the Dangerous Lagoon to Grouper Grotto where you’ll meet some BIG fish.  At up to 10′ (3m) and weighing a whopping 1,000lbs (454kg) groupers have a stout body and a large mouth, and coming face to face with them is intense!  Another fun aspect of the Dangerous Lagoon is that you can see it from below in the tunnel as well as from above at the Dangerous Lagoon Overlook, from a fish eye view to a bird’s eye view of this awesome exhibit.

If you can tear yourself away from Ripley’s Dangerous Lagoon to finish exploring the remainder of the aquarium one thing is for sure the depths of the Dangerous Lagoon will continue to awe and impress long after you leave and will keep you coming back to visit again and again.

Ripley’s Aquarium of Canada is a must see attraction while in Toronto.  You’ll meet 100-year-old lobsters, experience over 100 interactive exhibits from touch tanks to learning centers, and come face to fin with some endangered and remarkable species.

Do you have a favourite shark species? Or have you been to the aquarium? I’d love to hear about it in the comment section below!