Surrounded by lush greenery, colourful flowers and amazing animals from around the world, the San Diego Zoo has much to offer.  When visiting the San Diego Zoo, to see as much as possible, I recommend starting early as my day started at opening (9:00am) and I was there for eight hours.  Now come with me as I take you part way around the San Diego Zoo from the Northern Frontier to the Outback and from the largest bears to the tiny dung beetle. 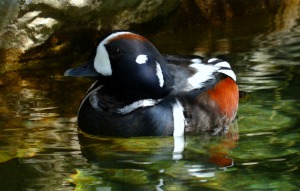 After a ride on the guided tour bus that takes you around three-quarters of the zoo I took the awesome aerial ride, Skyfari, from one side of the zoo to the far reaches of it, offering fantastic views of the zoo and Balboa Park.  At the far side of the zoo I was deposited at the Northern Frontier, home to Polar Bear Plunge, a 130,000 US gallon pool, and the zoo’s polar bears.  On my visit the polar bears were enjoying playing with an enrichment log full of tasty carrots.  The Northern Frontier is also home to caribou, artic fox and an Arctic aviary.  A stroll through the awesome Arctic aviary is wonderful, home to over 25 species of duck, these are some of the most beautiful ducks I’ve ever seen.  From buffleheads to mergansers and smews to harlequins, I saw much beauty and even a bunch of baby ducklings.

After the chill of the Arctic I headed down through Elephant Odyssey and Africa Rocks.  At the northern entrance there is a great educational exhibit called Fossil Portal that is set up like a mock excavation site, a simulated tar pit, that reveals bones from animals that once roamed South California around 12,000 years ago.  You’ll also see life-sized statues of the Colombian Mammoth, the Saber tooth cat and more, beside their modern-day counterparts.  It’s here I met and saw some amazing animals doing amazing things, like watching a keeper working on training a female lion, she knew exactly what to do to get her reward (a chunk of meat.)  I was also entertained by the stoic – yet comical – secretary bird, with its proper posture and long, skinny legs.  I stood and watched as this bird, whose natural diet includes lizards, used a small stick to display its natural behaviour in killing its prey by taking the lizard (or stick) and throwing it down to the ground, stomping on it and repeating the process.  It was amazing to watch.  I also met Delilah, a black hornbill who I learned likes people so much so that they had to put up a plastic sheet around her wired enclosure fence because she kept bringing her visitors dead mice.  Ah, so thoughtful. 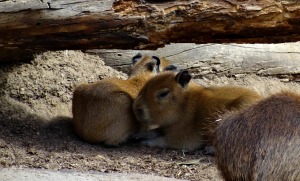 Get your cameras ready for all kinds of cute, like the stocky capybaras with their large sandy beach to lounge on and large pool of water to take a refreshing dip in, plus they even had a few darling babies.  Another great enclosure full of cuteness was the meerkat one, they were mostly all playing or digging but I also loved that the enclosure was full of tunnels, natural vegetation, rock and a large simulated termite mound – great for the sentinel meerkat to perch atop and be on the lookout.

From the cute to the not so pretty, there are also the zoo’s California condor’s here, still endangered the California condor is making great progress thanks in part to dedicated conservationists and scientists in the field as well as great West Coast zoos like the San Diego Zoo.  Though they have an ugly name dung beetles are a vital part of the ecosystem as they are the original recyclers.  Dung beetles are truly incredible, feeding on dung or feces, they can roll a ball of dung up to 10 times their own weight and they are the only insect known to orient themselves by the galaxy – now that’s out of this world!

The main feature is Elephant Odyssey’s elephant habitat covering 2.5 acres and home to the zoo’s blended herd of three African and four Asian elephants.  The well drawn out habitat offers several pools, one being 4,600 square feet and 7.5 feet deep at it’s deepest, as well as the Elephant Care Center where you can watch keepers do husbandry training and routine care with the elephants.  During my visit I watched on as one got a pedicure – might sound indulgent but it’s actually vital health care for theses large mammals.

My next stop was the Outback, home to some of the strangest and coolest animals on Earth like echidnas, one of only two mammal species that lay eggs, the other a fellow Aussie is the duck-billed platypus.  The zoo’s Outback is also home to wombats, wallabies and the Tasmanian devil, with its powerful jaws that create 1200 psi (pounds per square inch) – compare that to a human’s 265 psi.  The San Diego Zoo is actually one of only two zoos in the Untied States to have these remarkable creatures.  The Outback also has some interesting birds like the loud, laughing kookaburra and the bowerbird.  The male bowerbird is not brightly coloured and showy like some other male birds but he’s clever and a star decorator, he builds elaborate structures called bowers to attract females and decorates his bower with colourful things he finds, namely garbage, like blue plastic or yellow string for instance; he may not be attractive but he knows what is.

The newest part of the Outback is Koalafornia, finished in 2013 and home to the largest number of koalas outside of Australia.  In 1997 the San Diego Zoo welcomed the first albino koala to be born in a zoo and named him Onya-Birri (“ghost boy” in Australian Aboriginal language).  I was astounded by all the koalas, many dozing in trees like they often are, but with so many chances are good to actually see some activity however slow and mild it may be.  I was excited to see a few climbing around on the elaborate tree structures and even witnessed my first koala yawn – I must admit it was the cutest and funniest thing ever!

So whether your favourite animals are polar bears or koalas the San Diego’s Northern Frontier to the Outback exhibits are chalked full of interesting, loveable and truly cool creatures!