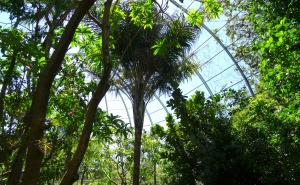 The San Diego Zoo has many exhibits that represent either various locations like Northern Frontier or Outback as well as themed ones like Discovery Outpost and Lost Forest.  The Lost Forest has extensive trails, winding through exhibits and aviaries and I must admit I got lost and turned around a time or two, but honestly its a great place to get lost in.  These trails are home to animals from the rainforests of Asia and Africa, and wind their way up into the canopy as well as along the forest floor, with arboreal animals displayed above and ground dwellers below.  Exhibits like this are great for fully immersing visitors in the habitats of its animals, giving a better sense of their natural homes and a deeper appreciation.  You can’t help but feel like you’re truly trekking the rainforests in some exotic locale with the sound of birds chirping, trees rustling with monkeys, water running nearby and the sweet smells of fragrant flowers along the path.  Among the creatures are some awesome species of trees too, like banana and sausage trees, bamboo and a giant ficus tree at 220 tons and over 50 years old it is a center piece to this area of the zoo.  Follow me as I take you into San Diego Zoo’s Lost Forest, the largest mass exhibit and full of amazing animals from the strange and unusual like the barbirusa to the majestic tiger as well as the zoos great apes.

The Lost Forest is home to some of my favourite animals like the strange yet elegant okapi, native to the forests of Africa it is closely related to giraffes, which is evident by its elongated neck and unusually lengthy tongue.  Right next door is the river hippo enclosure home to the zoo’s pair, and at the time of my visit a one day old baby (read more in my 5 Most Memorable Moments at the San Diego Zoo).  The enclosure boasts a large pool with underwater viewing area to watch these massive yet graceful swimmers alongside several species of exotic fish, like tilapia who provide spa treatments for the hippos by scraping off old skin.  Further down the trail you’ll encounter Malayan tapir, fishing cats and the mesmerizing Malayan tiger.  The tiger’s enclosure is a quarter of an acre with waters, a heated cave and plenty to keep them enriched like a pool to soak in, scratching posts, logs to climb on and more. 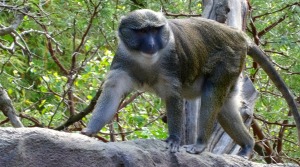 There are plenty of monkeys to be found along the monkey trails from capuchins to mandrills and even mangabeys which are some of the most endangered monkeys on the planet.  Some monkeys even share their homes with others like the Wolf’s guenons who inhabit the trees above the zoo’s pygmy hippos and even come down to hang out with their neighbours.  One of my favourite exhibits is home to Allen swamp monkeys, red-tailed monkeys and spot-necked otters.  This awesome multi-species enclosure has a waterfall and river, its full of foliage, ropes and logs to tight-rope walk on and huts to escape the heat, and there is even another similar exhibit across the way also with these animals as well as red river hogs and a forest buffalo.  Allen swamp monkeys are actually quite the ingenious fishermen; they place a leaf on the water’s surface and when a fish goes below it to hide they grab it up and unlike most monkey species they are very comfortable living around and even going in the water.

These trails are also home to other animals like the pancake tortoise, lizards, African dwarf crocodiles and even Indian gharials.  The San Diego Zoo is one of only seven zoos in North America to house these critically endangered creatures of which there are fewer than 250 remaining in the wild.

Within the Lost Forest there are three main aviaries full of lush greenery and brilliant birds.  The Scripps Aviary was named after Ellen Browning Scripps, a local philanthropist, who gave the funds to build the ‘World’s greatest flying cage’ in 1923.  It was remolded in 1958 and again in 1991 and now is reminiscent of a lush African rainforest with over 130 birds representing 35 species and a gorgeous waterfall.  Here you’ll find birds like the stunning bearded barbet, various ibis species, colourful golden breasted starlings and spoonbills. 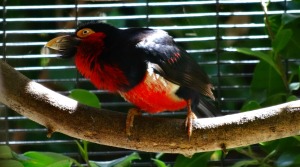 The Parker Aviary is home to around 15 species of birds from the rainforests of Central and South America.  The smallest of the three, it allows for a more intimate setting with a quaint stream flowing through and a bridge on which to cross it.  Here you’ll meet northern helmeted curassows, the curl-crested aracari and capuchinbirds with their bald blue heads.

The biggest is the Owens Aviary which is one of the world’s largest walk-through aviaries.  The Owen’s Aviary is breath-taking with its elevated pathways winding through treetops and along the forest floor, with two wonderful waterfalls, one of which falls into a pond full of exotic fish.  The aviary is home to around 200 tropical birds representing 45 species from Southeast Asia as well as Australia like the Victoria crowned pigeon strutting along the ground with its bold blue feathers and mohawk on its crown.

On your next visit to the San Diego Zoo go into the Lost Forest and let yourself get lost amongst the beautiful birds and enjoy the sights and sounds of the rare and exotic animals that call this marvelous exhibit home!