steps to the Child’s mansion

I was fortunate to be welcomed to the zoo by Julia who showed me around and beamed with passion for the zoo’s animals, conservation and education as she introduced me to some of the animals, spoke of the Santa Barbara Zoo’s success in conservation initiatives with California condors and the Channel Island Fox.  Her warm, fun and spirited personality was contagious and I realized later it really matched the feel of the Santa Barbara Zoo itself.  I learned so much about the zoo, from its early begins as the estate of Lillian Child and its transformation from a 75 year old mansion on the hill overlooking Santa Barbara to a hobo camp to a wonderful zoo (to learn more about the Santa Barbara Zoo’s intriguing history visit here), as well as sweet stories of its current animals and its brand new Discovery Centre with a green certified animal kitchen with viewing window so visitors can watch keepers prepare the daily food, of which some of it’s browse is grown on site, for the zoo’s variety of animals.  Also in the Discovery Centre is a classroom and during my visit this spring they were showcasing stunning photos of the west coast and the Galapagos by two artists.

Set on 30 acres the Santa Barbara Zoo opened in 1963 and as one reviewer said it is the “Audrey Hepburn of zoos”.  As a big Audrey Hepburn fan I don’t say this lightly but it certainly is; small, charming classy and sweet!  The zoo is home to over 400 animals representing 160 species and its great layout makes sure you don’t miss a thing.  If you want to see more climb aboard the train that will take you around the outskirts of the zoo and show you some behind the scenes areas like the animal hospital as well as the zoo’s neighbour the Bird Refuge with it’s large pond, stunning natural scenery and home to native species. 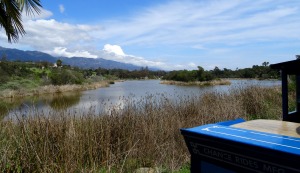 The Santa Barbara Zoo also holds a variety of functions from weddings to charity events on their large hilltop lawn with 360 degree scenic views of Santa Barbara and the mountains.  As well as things to do for the people, the zoo also provides many activities for its animals to help keep them happy, healthy and enriched and entertained like allowing the elephants to paint and bringing in tons of snow for Snow Fest and giving the snow leopards some snow to romp in.

So, whatever brings you to Santa Barbara, the sun, the food or friends, whether you’re alone or with family be sure to visit the Santa Barbara Zoo for a great day surrounded by amazing animals!