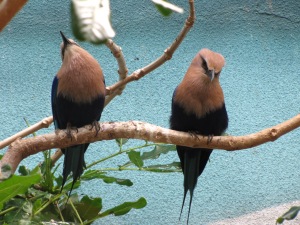 With the many animals I’ve worked with – reptiles, insects, mammals or birds – I must admit I’ve always found that birds easily show their unique personalities.  I mention this because of one of the birds we met along a path at the Philadelphia Zoo that caught my eye.  Strutting along the fence of its enclosure was a comical southern ground hornbill and within its beak it held a stuffy.  Smiling, I found it difficult to look away, as this bird appeared to mimic a human child showing off its prized toy.

Built in 1916 in the neoclassical style the Bird House was renovated in 2009 and became the McNeil Avian Center.  Noted as a ‘green’ building, the Philadelphia Zoo made a commitment to reduce its foot print and decided to recycle the old building and also to use a geothermal system to maintain the temperature control of the building that now houses over 100 species of bird from around the world.

Walking into the Center you are immediately encased in a refined building.  Reaching for the doors handle to enter the inner rainforest, I paused.  The handle was in the shape of a bird and was on a breathtakingly artistic door of sheer glass adorned with various bird silhouettes all over, flying and perched.

The first habitat you enter is the Pacific rainforest with mischievous green aracaris, Inca terns with their white moustaches and various other elegant and colourful birds flying over head.  It is here that there is also a simulated rain shower, which was a treat to see as the birds sat still and calm in the sudden down pour.  Also within the Center was an enclosure of conservational importance that housed the Guam rail and the Micronesian kingfisher, both of which are extinct in the wild.  The Philadelphia Zoo is among a few other zoos that house these incredible species and are hard at work to help breed them and work towards reintroducing them back into their native habitats.

Another bird of note at the zoo was the waldrapp ibis which is also critically endangered.  With a bald head, erratic neck feathers and vulture-like appearance these birds verge on ugly but they made me smile.  As we approached their outdoor enclosure they appeared, wings outstretched soaking up the sun, to be welcoming us with an embrace.