Perched atop the Small Mammal House are a cat, wolf and bear statues.  The Smithsonian National Zoo has a wonderful assortment of statues like these, most with happy children clambering over them for a photo-op.  Statues range from otters at play, a sloth bear and her young, giant pandas and many more including a bronzed giant anteater statue (circa 1938) that welcomes you at the entrance to the Small Mammal House. 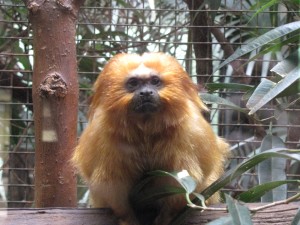 Display cases showcase pictures of golden-lion tamarins and three-banded armadillos ‘painting’ for enrichment, a practise used by many zoos around the world and sometimes the ‘art work’ is auctioned or sold off with the proceeds going into conservation efforts.  Golden-lion tamarins can be found in numerous enclosures throughout the Small Mammal House.  For over 30 years the Smithsonian National Zoo has been an integral part in breeding golden-lion tamarins for reintroduction back into the wild.  With numbers once estimated at only a few hundred individuals’ zoo keepers, researchers and scientists set out to bring this amazing species back from the edge of extinction.  Hard work and determination proved a success as the population is now up to roughly 1500 individuals and was one of a very few species to be upgraded from critically endangered to endangered.

One of my favourite parts of visiting zoos is seeing multi-species exhibits.  The Small Mammal House has one specific enclosure with a South American rainforest theme and showcasing a variety of species from the ground to the top recesses.  Within this one enclosure you can spot the three-banded armadillo (if you’re lucky) who is usually hidden deep in the ground cover, a two-toed sloth hung motionless in the top corner, almost blending into the green wall was a tokay in classic gecko poise, also scurrying around on the ground and over rocks are agoutis.  One species you’ll be sure to see jumping from tree branch to tree branch is the stunningly beautiful golden-lion tamarin.  Their small, slender bodies topped with their characteristic golden mane of hair are a delight to watch.

Another important aspect of zoos is the keeper/visitor interaction.  I find it especially significant for children to participate in keeper talks to allow them the chance to get up close and learn about specific species and their importance in the life cycle.  On our second afternoon at the zoo in the Small Mammal House there was a keeper visit with naked mole rats.  With a partial fondness to these strange yet fascinating little rodents I was thrilled to see a few children gathered close to the keeper with his little charges, but I must admit I was upset to have missed out on the talk as he was just finishing up when I arrived.  As an avid zoo visitor, promoter of zoos and educator on conservation I feel zoos are such an important avenue for people to get up close to these amazing animals most – if not all of which – probably will never see in the wild.  For people visiting zoos they have the chance to make that oh so vital connection with these animals and that connection can lead to a more conservation minded life.

One thought on “The House of Fur”