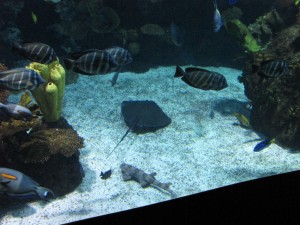 Just past the entrance stands a large fountain and in its center towers a steel globe.  Emblazoned across the globe’s middle is written “Conserve Our World, Experience Wildlife.”  Being a zoological park and aquarium the Columbus Zoo has a large variety of animals for the public to encounter, everything from giant tortoises to elephants, sharks to polar bears, and all showcased in natural enclosures without the use of bars.

Past the squawking flamingos looking like pink yoga enthusiasts as they balanced on one foot and fluffed up their feathers to keep warm against the chilly morn and the penguins still half dozing in their indoor enclosure peeking out the doors seemingly trying to decide if it’s time to face the day, we arrived at Discovery Reef.  Here we were faced with a large, 88,000 gallon floor to ceiling saltwater aquarium filled with various colourful reef fish, turtles, stingrays, sharks and even live coral that was grown at the zoo.  Their live coral exhibit is actually the largest in the USA.

Another big draw to Discovery Reef is Manatee Coast with a 192,000 gallon tank set up to simulate the Florida mangroves, with ducks along its banks and plenty of fish within its waters.  Also in its waters was a sea turtle with an injured front flipper, sting rays and manatees with propeller marks across their backs.  Manatee Coast is not only an exhibit but also serves as a rehabilitation facility for injured manatee and is one of only three of its kind outside of Florida.  As of 2003 the zoo has successfully rehabbed and reintroduced more than a handful of manatees back into the wild.