Also out on Toronto Zoo’s savannah is Kesho Park Headquarters, a cabin set up like an African safari outpost, where visitors are surrounded by animal skins, horns and tortoise shells that can be touched, as well as pictures and information on conservation issues.  Interactive exhibits like this are great for adult and children alike and help to educate visitors on what they can do – like not purchasing animal related products like skins, while travelling.

Rounding the northern curve of Kesho Park I stopped to watch the Grevy’s zebras grazing their hillside with the sun shining down on them.  As if in spotlight, their brilliant black and white coats appeared to shimmer in the sun’s rays.  At that vantage point I got lost in the moment, as I looked out past the zebras I could see rhinos and gazelles grazing, vultures sunning with their wings outstretched, and with no bars to block my line of sight, it was like I was a thousand miles away looking out over the African plains.

Visiting the Toronto Zoo over the past 30 years I’m always amazed that every time I visit I meet a new animal.  As I continued walking past the zebras I noticed that on the other side of their enclosure were two Marabou storks.  Fascinated, I moved in as close as I could get and instead of the handsome storks of my cartoon past these were bald with a disproportionate large and long beak and long, stick-like legs.  With their slow and precise movements they looked like the decrepit old men of the bird world.  As I stood watching them I realized they were stalking something, possibly a juicy grasshopper, into the tall grass.  I found it so odd that they appeared to be jointly stalking, side by side with each movement matched.  Then startling me, from one of the storks came a loud, strange noise.  Was it in excitement or perhaps discovery?

One of my favourite animals to visit at the zoo is the olive baboon.  These always entertaining animals always seem to know when to put on a show.  I’ve had many memorable moments watching them, from laughing as I watch the young ones with endless energy to play, somersaulting and chasing each other to the time a baby sat on the glass in front of me and as I put my hand on the glass to lean closer his little hand  came up to match mine. It was a touching moment as we stared into each other’s eyes.  These prolific animals always seem to have an endless supply of babies, which always remind me of the two olive baboon babies that I had the opportunity to help rear, Jabari and Malik – each unique in their personalities and dramatically different attitudes.

Yet another of my favourites along the path is also one the most misunderstood animals – the hyena.  I’ve always been drawn to hyenas and the more I learned about them the more amazed I was that an animal could get such a bad reputation from Disney movies and construed ideas of their behaviour.  When most people think of hyenas they conger up an image of an ugly creature that is ruthless and eats its prey alive.  From an animal lovers perspective I can see the beauty in all animals, and the idea that these animals are ruthless is only partially correct.  Like most predators hyenas must hunt, and sometimes scavenge, to survive, but when looking at them more closely you see an animal that is very social, living in clans of up to 80 members.  Another fact most don’t know is that they are matriarchal, where females are the dominant ones.  While hyenas are naturally nocturnal, it is rare to see them lively during a zoo visit but on this visit one of the hyenas was extremely active.  The hyena was running around its exhibit, stopping to look out from atop one of the dens, and then speeding around to one of the viewing windows.  It was the perfect opportunity to witness the hyena’s strange gait, at times it appears to be prancing and other times an odd gallop. 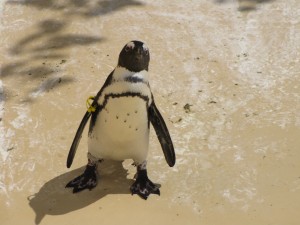 The last stop before the African Rainforest Pavilion is also the Toronto Zoo’s newest exhibit, Penguins of the Cape.  The zoo revamped the old seal enclosure to now house African penguins as well as pelicans and Egyptian geese.  Not only are you able to watch the zoo’s colony strutting with their tuxedos from land level but also from below, with underwater viewing you can see how fast they shoot through the water and from atop you can see them literally pop out of the water, like from out of a canon, and land on their feet.  Not only will watching them in action make you giggle and bring a smile to your face so will the Toronto Zoo’s many comical yet educational commercials to advertise their new addition.