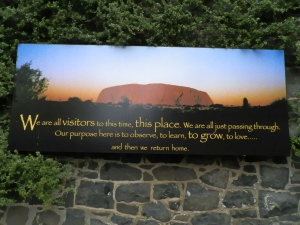 The Edinburgh Zoo has the only giant pandas in the UK, and is also home to the UK’s only koalas.  After a stroll through the Australian exhibit’s walk-through aviary where you see the beautiful Victoria crowned pigeon, you’ll meet the zoo’s Queensland koalas.  Some people think that koalas are drugged from the toxic eucalyptus leaves they eat and this explains why they’re always so lethargic but this is a myth.  The truth is that with a combination of a low metabolism and a diet that lacks in nutrition, Koala’s conserves their energy with minimal exertion.  So, it was not surprising that one was sleeping when we visited, as koalas spend approximately 19 hours a day asleep.  While the one slept, which is what I’m used to seeing a koala do when I see them at a zoo, it was a pleasant surprise to see the other koala actually moving around.  We watched on as he showed off his powerful upper body strength and his sharp claws as he, with very deliberate movements, climbed up the tree.  It was great to finally see a koala in action; it reminded me of the slow, deliberate movements of a chameleon.

I found another secret gem, in the shape of a large picture of Australia posted on the outer wall of the Australia exhibit that had a great quote…”We are all visitors to this time, this place.  We are all just passing through.  Our purpose here is to observe, to learn, to grow, to love…..and then we return home.”  This message read loud and clear to me in two respects, first as a conservationist and how we must love the land and its inhabitants and conserve them, and also as a traveller exploring the world we realize we are but a small spec in the wide world and must learn from its land, its people and to truly embrace it.

The zoo’s third species of penguin was next on the trails.  The gentoo penguins were splashing and swimming and strutting around in their tuxes. One even looked like it was laying on a nest, not sure if there was an egg under there or just a pile of rocks.  The gentoo penguin is the fastest underwater swimming bird, reaching speeds of 35 kilometres an hour – that’s over five times faster than the average human.

The last pavilion we visited was the Monkey House that had indoor and outdoor enclosures.  On this rainy day it was no surprise to see them all inside.  Here you’ll meet a wide assortment of monkey species from the yellow-breasted capuchin with a baby in tow to the critically endangered drill.  The Barbary apes, which are actually not apes but monkeys, were quite entertaining with a few of the youngsters running around, chasing each other and swing off the ropes, it was typical cute monkey fun.  Then there were the beautiful and striking Diana monkeys, named after the Greek goddess Diana, with their black face and white beard and chest.  Also similar in appearance, certainly not as striking but just as precious, is the L’hoest’s monkeys.  The Royal Zoological Society of Scotland helps to fund the Nyungwe Primate Ecology Project to study this threatened mountain monkey in its native habitat of Rwanda.  A first for me was seeing the purple-faced langur.  I’m not entirely sure why it’s called “purple-faced” as its face is brown, but these monkeys, that are endemic to the island of Sri Lanka, are one of the most endangered species of primate in the world.  Another special treat in the Monkey House was all the babies and youngsters, clearly these monkeys are happy and healthy and procreating to keep their populations strong.  One baby in particular that stood out was a baby black howler monkey.  Only the male of the species is black while females and juveniles are a yellow-ish buff colour, this colouration difference is called sexual dichromatism.  One of my many dreams is to visit the wilds of South America to see or at least hear these amazing animals perform their loud chorus song that is one of the loudest calls of any animal.  So it’s easy to say I have a fondness for these monkeys, and it was darling to watch a wee young one with its large head and skinny arms cling to its mother and even slowly venture off her and onto the branch beside her yet never lost contact with its protector.

Lastly was the Steller’s sea eagle enclosure.  Seeing this species was another first for me.  From coastal northeastern Asia, the Steller’s sea eagle is the heaviest eagle in the world weighing in at 15 to 20 pounds, with an 8 foot wingspan and rare to find in captivity.  These strikingly beautiful birds have dark brown to black plumage (feathers) with stark white accents.  The zoo’s pair looked right at home perched up high in their lush enclosure with a stream running through it.

The Edinburgh Zoo’s mission is “to inspire and excite our visitors with the wonder of living animals, and so to promote the conservation of threatened species and habitats.”  Even through the rain drops and soaked clothing, the Edinburgh Zoo proved to be enriching and exciting with their diverse collection of species, splendid enclosures and inspiring conservation messages throughout.  I am thankful for visiting the Edinburgh Zoo and recommend it rain or shine.

3 thoughts on “Wrapping Up At the Edinburgh Zoo”