The Dublin Zoo is located in the heart of the lush Phoenix Park and passing through the  gates into the zoo that rich park feel continues.  I was immediately blown away, there in front of me was a beautiful large lake with two sweeping paths wrapping around it.  I could tell straight away this was a great ecosystem to not only build a zoo around but to provide a great habitat for the plethora of local wildlife and especially waterfowl that I saw enjoying it with babies in tow.

Like I wrote in my last post, the Dublin Zoo is cleverly arranged in themed areas that almost seamlessly flow as you tour the well laid out park.  The first area is the Asian Forest where you’ll encounter animals like the Asian lion to the Bornean orangutan.  Though I didn’t get to see the orangutans on my visit I did read about an endearing story about one of the zoo’s orangutans while researching the zoo.  In 2008, Jorong was seen rescuing an injured moorhen chick from a pond.  The orangutan, using a leaf, gently coaxed the bird to the shore and delicately lifted it onto the grass.  The rescue became known to the public in 2011 when the video of it was posted to YouTube.  Oh, the power of technology and a kind heart.

One thing that really stood out, and that I loved, was that the zoo offered indoor and outdoor enclosures to many of their animals.  And with many of their outdoor enclosures on islands or behind glass there were no bars and no obstructed or harsh views of the animals.  It was great to watch the Sulawesi crested macaques play on their lush island space that was full of trees and other climbing structures. 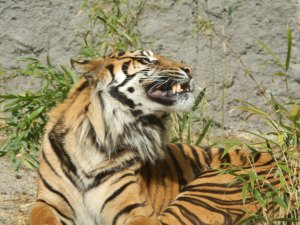 Sumatran tiger smiles for the camera

After a stroll by the smallest species of tiger and in my opinion the most striking, the Sumatran tiger, you’ll see the snow leopard, if you can pick it out amongst the rocks it’s so well camouflaged to share its home with, and then the slender, slouchy old man-like siamang gibbons.

On the verge of the next themed area there are the sun worshipers of Madagascar, the ring-tailed lemurs who have their own little island here at the Dublin Zoo.  Of all the lemurs these spend the most time on the ground, but it was nice to see some sunning, some exploring and some climbing through the maze of branches.  Then the pretty in pink flamingos lead to the Humboldt penguins who share their rocky home and pool with some herons.  Like I keep saying it never ceases to amuse or astound me when every time I see a penguin about to take the plunge into the water with his toes at the edge it seems to take him forever to take the leap.  I was even video tapping this one at the Dublin Zoo that finally after yelling encouragement and an almost 10 minute wait he finally sort of fell ungracefully in. 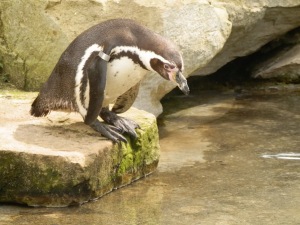 The next area is Fringes of the Arctic where you’ll meet the largest species of tiger, the majestic Amur tiger and notably the only tiger species to live in the cold north.  Another species found here is the grey wolf.  Sadly the last wild Irish wolf was killed before the end of the 18th century.  But here at the Dublin Zoo their pack is alive and well and surprisingly active; after a keeper called to them their heads perked up and seemed excited as they came closer. 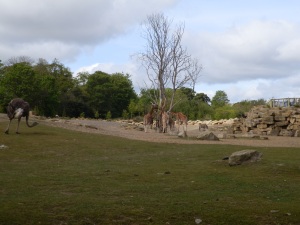 My stroll then lead me to the African Plains exhibit that is where you’ll find exhibits like the African Savanna, the Gorilla Rainforest and Chimpanzee Island and an assortment of other animal enclosures.  After passing by a massive hippo who was having a siesta on the grass, and by the way I don’t think you can fully appreciate how large these animals are until they’re on land – they almost look unnatural out of water, I walked up to the African Savanna exhibit.  The true African savanna is a magnificent place where around 2 million large mammals, that are herbivores (plant-eating), live in infused groups appearing as one large mass at times where safety is in numbers.  Here at the Dublin Zoo’s large African Savanna exhibit you’ll find a variety of species living together like ostrich, zebra, scimitar-horned oryx, white rhino and giraffe.  This summer the zoo welcomed a new Rothschild giraffe calf.  The Rothschild giraffe is the most endangered species of giraffe with only around 700 individuals in the wild.  This exhibit offers numerous viewpoints to see the animals; this is especially in such a large yard you never know where the animals will be.  I always love a great exhibit like this one, where there is massive space with trees, a watering hole, different landscapes and filled with a variety of species, its great enrichment for the animals and showcases a natural environment.