Regent Park, one of London’s many large and picturesque parks, is a great place to enjoy a paddle boat ride on its lake or go for a stroll to take in the streams with waterfowl and lush green trees as well as some with pretty pink flowers.  In the northern edge of the park is one of the world’s best zoos, the London Zoo.

In 1828 the London Zoo opened to Fellows of the Zoological Society of London (ZSL) and became the world’s first scientific zoo.  The Society has seen many famous Fellows over the years from Charles Darwin to David Attenborough.  In 1847 the zoo opened its doors to paying visitors.  1931 saw the opening of the ZSL Whipsnade Zoo, a more spacious site where the larger animals like elephants and rhinos are housed, and the world’s first open zoological park.

The London Zoo has seen many firsts in its almost 200 year existence from the opening of the first Reptile House in 1849, the first public Aquarium in 1853 and the first insect house in 1881 to being involved in the first international co-operative breeding program when they lent their Arabian oryx, ‘Caroline’, to the world herd in Phoenix, Arizona in 1962.

The Zoological Society of London’s vision is ‘a world where animals are valued, and their conservation assured’ and with conservation projects in over 50 countries they’re hard at work.  Some notable releases are; in 1986 ZSL coordinated the release of the critically endangered Pere David’s deer in Da Feng, China and in 1995 ZSL released 100 sand gazelles into Empty Quarter, Saudi Arabia which was the world’s largest release of captive-bred mammals.

The London Zoo was also home to the bear that inspired the character Winnie-the-Pooh.  In 1914 a Canadian Lieutenant gave Winnipeg bear (or Winnie) an American black bear to the zoo.  When A.A. Milne visited the zoo with his son, Christopher Robin, the boy was so charmed by the bear and so Milne wrote the famous series for him, Winnie-the-Pooh. 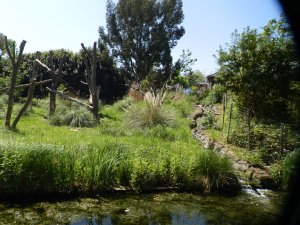 The Zoological Society of London’s Zoo is an expansive zoo covering 36 acres (15 hectares), with over 750 species totalling over 17,000 individuals of which at least 112 are listed as threatened.  With its many historical buildings, award-winning exhibits, various keeper chats and by far my favourite animal show ‘Animals in Action’, the London Zoo is a must have experience.

To read more about my visit to London please visit “The World As I See It” – my travel blog @ http://ladystravelblog.wordpress.com