The Woodland Park Zoo is full of amazing exhibits, many of which have won awards.  And the zoo’s African and Asian regions are bursting with fabulous, realistic enclosures with trails linking them that lead you to forget you’re in the city and not in the forest of Asia or on the African savanna.

The zoo’s African Savanna was the first of its kind in 1980 and won national Best Exhibit for its large, natural and realistic enclosures.  From the south entrance you enter into a small African village with huts and an African primary school with black board, desks and even skulls of African animals.  But with its northern wall down you are witness to the Woodland Park Zoo’s African Savanna, with grazing zebra and gazelle, oryx and ostriches.  With its representation of village and animal life the zoo blends in elements of African culture and the importance of balance in conservation between animals and humans.  Also in the zoo’s African Savanna you’ll find giraffe, warthogs, hippos and sweet patas monkeys that can be found hidden in the trees or perched on their large enclosure’s giant rocks, looking out over their home.

There is also a Savanna Aviary, home to beautiful birds like the blue roller, weavers with their strange nest throughout the trees and even a curious duck who was quite interested in the visitors – wasn’t sure if he was in charge or just nosy.

Another great enclosure was the African lion one, a massive yard full of trees, brush and rocks and on the day of my visit the zoo was releasing a new young male lion out into the yard to explore.  It was great to watch him see his new home for the first time as he cautiously made his way around with his mouth open and tongue slightly out to catch any scents that were around.  Many mammals do this, it’s called the flehmen response and it’s when the animal curls back its upper lip to expose its teeth and essentially breathes in the air to detect any scents that linger.

From Africa to the Tropical Asia exhibit’s Trail of Vines where you’ll see animals found in South East Asian rainforests.  Here you’ll meet the Woodland Park Zoo’s Asian elephants in their award-winning 1.5 acre yard with a full-depth swimming pool.  Also along the trail is the Malayan tapier, siamangs swinging in the trees, lion-tailed macaques, a massive Indian python, and orangutans.

I was completely blown away by their amazing outdoor orangutan enclosure and admit it is the best I’ve seen thus far.  The enclosure was full of tall dense trees, foliage and a babbling brook. It was such a realistic habitat for orangutans that I lingered for a while as a few were up in the trees, one even in a large nest high in the trees much like it would make in the wild. It’s exhibits like this that keep me passionate about promoting the great work and homes that zoos provide for their precious animals.

The Tropical Asia exhibit ‘s Bamboo Forest Reserve boasts more great enclosures home to some favourites and adorable animals like the small-clawed otters and one of my favourites the tree kangaroo – who was nestled into a few branches high up in his enclosure attempting to nap.  The bamboo forest of Asia are a vital habitat and food source for many animals.  Bamboo is actually the fastest growing plant on Earth with some growing up to 4’ in a day – making is a great natural resource.  Probably the cutest bear species can be found here, the sloth bear, along with its growing cubs.  Sloth bears feed predominately on ants and termites and are the only bear to carry their young on their back. 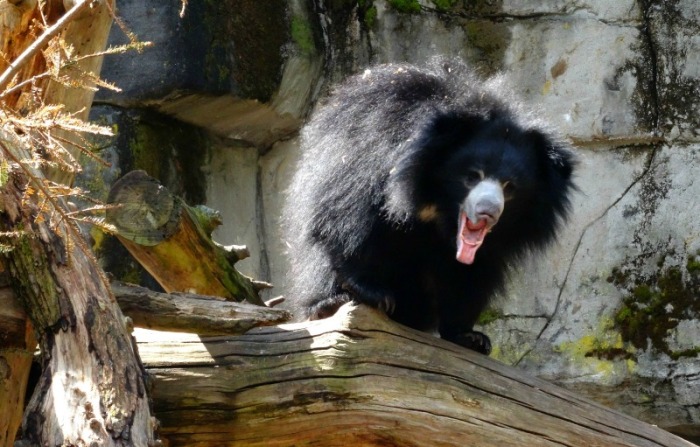 Did you know that the Hindi word for bear – bhalu – was the inspiration for The Jungle Book’s bear Baloo?