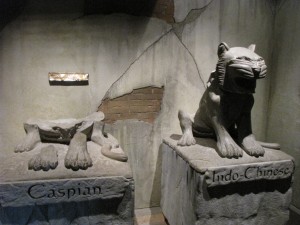 Passing beneath a large arched stone entrance that meets the earth with massive tiger paws with claws extended, you are welcomed by the sights, smells and sounds of Columbus Zoo’s Asia Quest exhibit.  Just like in other areas of the park you are surrounded by music that is specific to that country of origin.  With the sounds of Asia, including a large Tibetan drum that beats like a heart, there are the distinct smells of the animals and the sights of Asian inspired buildings help transport you into the depths of Asia.  In what resembles an old Buddhist monastery that’s been overrun by the wilds of nature you meet a troop of silver leaf langurs.  The Columbus Zoo has a plethora of babies this year and the silver leaf langur are no exception.  We watched on as a toddler ran, hopped and somersaulted in the grass and over drift wood with an older probable sibling.

Other animals you’ll find here include the munjac; a small deer with tusks, a large and powerful water monitor, red pandas, Palla’s cats and at one time Fluffy.  Who – and what was Fluffy, you ask?  Fluffy was a reticulated python that held the Guinness World Record for the longest snake in captivity at 18 feet long.  Sadly she recently passed away but the zoo was able to acquire one of her offspring who was named Hanna after Jack Hanna.  Though right now she is only 12 feet long, at 12 years old she still has plenty of time to grow.

In the main building housing some of the animals found in Asia Quest there are numerous informative exhibits educating zoo visitors on conservation issues, animals in danger and the most powerful display on extinction I have ever seen.  It’s as if you’re in an ancient temple surrounded by stone walls and large stone statues of tigers.  Each stone statue represents a subspecies of tiger, the Amur from Russia and Siberia, the Bengal from India as well as the other seven; Javan, Bali, Caspian, Indo Chinese, Sumatran, South China and Malayan.  While the Sumatran and Bengal tiger statues remain strong and intact, along with the other surviving subspecies, the Bali, Caspian and Javan statues have become a rubble of stone with only the hint of what was once powerful tiger paws.  What does this all mean?  The six intact tiger statues represent the surviving tiger subspecies while the ruins of the Caspian, Bali and Javan represent the extinct subspecies.  This exhibit drives home the pure truth that extinction is forever.