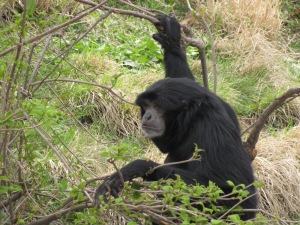 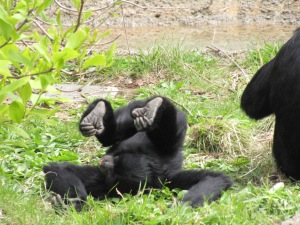 The Columbus Zoo’s Islands exhibit takes you on a voyage to the islands of south-east Asia, with minimal use of enclosures by using moats and waterways to contain the animals on their islands providing a realistic experience for visitors into the lives of some amazing creatures.  Your first encounter is with the Lar gibbons and siamangs, one being in an indoor enclosure simulating a Buddhist temple while the other romps on the grassy islands of the outdoor habitat.  It was such a pleasure to watch the family of siamangs, the largest of the gibbon family, mom and dad casually watch on as their little one somersaulted in the grass and playfully sat with his legs up in the air as if without a care in the world.  Pure happiness.  Another attraction to the Islands exhibit is the boat ride you can take around the islands to get an up-close look and better appreciation for the different animals.  One of which, a black swan, sat upon her nest that appeared to be literally bursting at the seams with precious eggs, one actually poking out from under her stark black wing.  Another animal that can be found here is the always loveable Sumatran orangutan.  When we visited the zoo’s large male, Willie, was placidly lounging on his huge wooden loft-style tower.

From the Islands to the Outback where you can feed beautiful birds, walk amongst kangaroos and encounter some of the world’s most rarest animals in captivity.  It’s here that Columbus Zoo allows you an awesome experience.  At the Lorikeet Garden you can purchase a cup of nectar then enter the garden and as you stroll along the path these brilliantly bright birds start landing on your arm or your hand holding the cup of nectar and then begin to lap up the sweet juice with their pink tongue.  With a bright orange beak, bold blue face, yellow neck band, emerald green body and red breast, the rainbow lorikeet is found in Australia and surrounding islands and are social birds which is evident as they perch beside one another on a nearby branch, on a bench or nestled together on your hand sharing in the nectar.

The ability to have such a memorable experience, one on one with animals, especially in such a surreal setting, allows zoo visitors to connect with and care about and appreciate these animals.   The hope is that with an appreciation for these animals zoo visitors will want to do something to protect them and their native habitat.  Making that connection is a huge part of how zoos begin to create awareness and understanding on the issues facing wildlife and wild places.

After experiencing a rainbow flock you head over to Kangaroo Station where after passing through a gate you are free to walk the path alongside red and Eastern grey kangaroos as they relax on small grassy hills.  Along the path are a variety of road signs that cleverly inform visitors on interesting characteristics of kangaroos – how tall they are, a large red male can reach over 6 feet tall – how fast they can be, reaching speeds of 70km per hour.

Next on the Aussie walkabout is the Roadhouse that houses nocturnal animals that call down under home.  Venturing through the darkened building you awarded the opportunity to peek into the lives of some of the most fascinating creatures in the world, such as the echidna, Prevost’s squirrel (one of the prettiest squirrels you’ll ever see, if you can catch a glimpse of these fast lightning bolts), and one of my favourites the tree kangaroo who look like a much smaller version of large kangaroos but have a beautiful coat and slow, deliberate movements topped with a sweet face.  The Columbus Zoo is one of only eight US zoos to permanently house koalas and at the Roadhouse you can see them in their indoor or outdoor enclosure.  It’s not surprising but when we visited one of their koalas was huddled in the crotch of a tree sleeping as koalas spend up to 18 hours a day sleeping to conserve energy due to their less than nutritious diet of eucalyptus leaves.

A big draw for me to the Roadhouse was a handful of some of the rarest captive animals in the US.  The woylie; a small marsupial also known as the brush-tailed bettong that is critically endangered and only found in 8 US zoos, the banded palm civet; cat-like with a narrow mussel and only found in 2 US zoos, the tiger quoll; another marsupial that is carnivorous with a cubby cat-like body, rat-like face and a reddish brown coat with pale coloured spots and Columbus Zoo has the only 2 outside of Australia, and the brown kiwi; a round bowling ball body with skinny stick legs and a long slender beak and only found in 3 US zoos.  The Columbus Zoo is the first institution in North America to successfully hatch three kiwi in one year, 2011, one of which was on display when we visited in the spring.