The first exhibit, going counter-clockwise, is Tropical Diver where you’ll find the Coral Kingdom and the largest living reef of any aquarium in the world.  Coral reefs are referred to as “rainforests of the sea” and are some of the most biodiverse ecosystems on Earth.  Being home to 25% of all marine species and combining to cover half the country of France, sadly these coral kingdoms are under threat from climate change, ocean acidification, water pollution and much more.  The most well-known is the Great Barrier Reef, located off Queensland, Australia and it’s also the largest at almost 3,000 individual reefs covering over 2,500km.  If you’ve never had the opportunity to swim or dive among the beauty of any of the coral reefs then a visit to the Georgia Aquarium’s Tropical Diver exhibit is a good start to gain an appreciation for this threatened ecosystem and all that it offers. 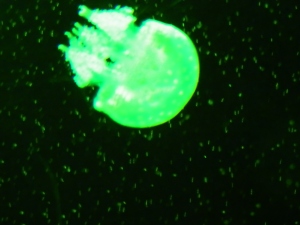 Enclosures include jelly fish, some with long, wispy tentacles like long free-flowing hair trailing in the breeze, another that looks like a neon green mushroom from a Mario Brothers video game, as well as plenty of colour fish like my favourite the Mandarin fish with its beautiful skin like that of a striking canvas, as well as another magnificent creature – the seahorse, here you’ll find them bobbing amongst the sea grass.   The Tropical Diver is home to the unassuming spotted garden eel.  These slender eels look like the miniature versions of the giant stripped worms from the popular Beetlejuice and seem to sway, half buried in the sand, like a blade of sea grass in the current.  Another elusive character is the yellowhead jawfish that pops out from its home in the ocean’s sandy floor with a shell or stone that it spits from its powerful mouth.  I couldn’t turn away and giggled as I watched this seriously entertaining fish popping in and out of its wee hole in the ground with an unwanted item and spit it out, over and over as if it were redecorating below and ridding its home of construction debris with a look disdain.  Found in the coral reefs of the Caribbean Sea, the yellowhead jawfish is a mouth brooder – meaning the males carry the eggs in their mouth until they hatch.

The biggest attraction in the Tropical Diver exhibit is the largest living reef of any aquarium in the world with 164,000 gallons of water and almost 100 different fish species.  This recreation of a tropical Pacific coral reef wraps up and overhead to draw you in as if you’re immersed within the enclosure.  With living corals, thousands of colourful reef fish as well as an overhead crashing wave that crashes every two minutes to help simulate the natural motion of the sea, this is a truly astounding exhibit that is mostly self-sustaining.  Here you’ll encounter beautiful fish like the bird wrasse, the palette surgeonfish (otherwise known as “Dory” from Nemo) with their sharp venomous spines, and giant clams that can grow over four feet wide and weigh as much as 500 lbs to name a few.

From playful fish to cartoon-like creatures and a massive enclosure full of live coral and colourful tropical fish in downtown Atlanta, Georgia Aquarium’s Tropical Diver exhibit has everything a visitor can hope to see within the reefs of the world.