From the warm waters of Tropical Diver to the chill of Coldwater Quest one thing is sure, some animals you’ll encounter here will warm your heart.  This is also where you’ll find most of the mammals in the aquarium’s collection.  Here I found the first of the aquarium’s touch tanks where for the first time I had the opportunity to touch the soft but sticky fish-eating red anemones as well as the sharp purple sea urchins and starfish.  One thing I’m always very adamant about is the power of interaction with animals and how this helps, especially children, learn to appreciate them and in turn care to make a difference and help save them.

Then I came face to face with the giant Japanese spider crab that at 12″ across and a body 15″ wide and weighing as much as 40lbs, this creature looks more like something out of a deep-sea horror movie than scurrying around a large tank at eye level in Georgia.  From the creepy spider crab to the elegant and beautiful Australian weedy sea dragon to the wolf eel that looks like the sea’s version of a wise old man with loosened dentures, the Coldwater Quest has creatures out of your wildest imaginations.

First of the mammalian exhibits and also the second largest habitat is home to the gentle beluga whales, with two adults and two juveniles, who are still greyish in colour and not the stark white of their adult roommates, are the only whales with flexible necks.  New to this habitat are four harbor pups (young seals) that are already at four feet in length and weighing in between 86 and 114lbs.  We had the honor of a big announcement by staff on the day of our visit, as we stood watching these graceful animals enjoy the far reaches of their habitat, they announced to the crowd the great news of an impending birth as their adult female was pregnant. 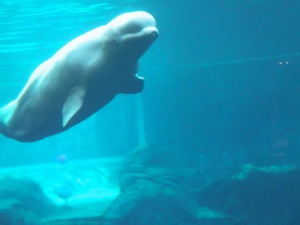 The Coldwater Quest also boasts an African penguin exhibit with over 25 nesting areas in the natural rockwork that proved well for these endangered birds as they saw chicks this year, as well as a state of the art lighting system that provides a natural light cycle for them.  Sadly the penguins were off display for my visit but to show the light humour of their keepers there was a single stuffed penguin perched in the exhibit, a mascot for its more lively friends, which brought a smile to my face.

The last and probably the most charismatic are the Southern sea otters with space for interactions with trainers and otters as well as a sneak peek window where visitors can see a behind the scenes area.  These remarkable animals, with the densest fun of any mammal, always seem to be on the go, swimming and curiously playing with their enrichment toys.

Coldwater Quest is a great exhibit to have new experiences whether in their touch tank or watching as the belugas twirl or learning about one of the world’s most intelligent creatures, the giant Pacific octopus, this exhibit has a something for everyone.