Located in downtown Charlotte, North Carolina, Discovery Place opened in 1981 and offers a wide range of exhibits that will amaze and excite you!

Discovery Place prides itself as an ‘organization dedicated to inspiring exploration of the natural and social world’ through extraordinary exhibits and ‘educational programs that inform, challenge and engage audiences of all ages.’

There were so many diverse exhibits, many of them interactive and great for children to get hands on learning.  Some of these exhibits include; Grossology – where you’ll learn in a fun and interactive way about some of the gross aspects to animal life, like what make up owl pellets, gassy cows that produce greenhouse gases and my favourite – nature’s pooper scooper – the dung beetle. 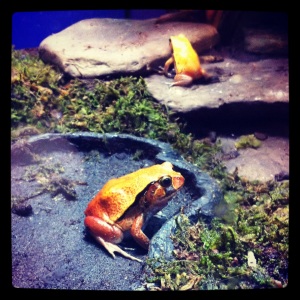 Another exhibit is Fantastic Frogs where you’ll meet a variety of live frogs in replicated environments of their natural habitats and learn what makes each one remarkable, like how some use camouflage and others use poison and how the tomato frog produces a slimy, glue-like substance that is almost five times stronger than rubber cement to avoid predators.

Why are frogs so fantastic?  Frogs are amazing in many respects.  Around the world frog numbers are sadly declining at incredible rates and at least a third of amphibians are threatened with extinction.  They are an integral part of the food web and are also bioindicators, meaning their health indicates the health of their ecosystem.

There’s also a room full of intriguing insects like scorpions and spiders as well as other strange creatures like the Japanese wasp fish which was stunning.  Another room, called the Collection Lab where you’ll be able to look inside some cool animals with its displays of skeletons. 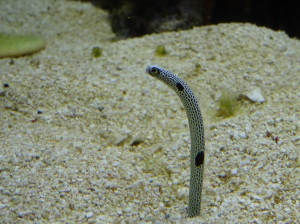 Next explore the underwater world with Discovery Place’s aquarium.  Here you’ll encounter an assortment of habitats from local coasts to coral reefs.  Entering into this part you almost feel immersed in the sea as the colours of blue reflect off the walls around you.  Some amazing creatures you’ll meet here are Atlantic sea nettles, octopus, puffer fish as well as seahorses and even caiman lizards who spend their lives around water.

Not surprisingly my favourite exhibit was their Rainforest.  Walking in you’re hit by the sticky heat and humidity and after crossing the swinging bridge that looks over the tropical habitat you are met with the sounds of exotic birds like the blue gold macaw and a curious sun conure named Daisy.  It was a treat to try to locate all the beautiful species of birds among the giant leaves and waterfalls, some I’d never seen before.

Along with the interactive learning exhibits, birds, frogs and fish, Discovery Place has an IMAX theatre.  The massive domed roof really draws you into the movie and makes you feel like you’re right there.  I was fortunate for when I visited they were showing The Flight of the Butterflies and Jerusalem.  So I had to see both!

The Flight of the Butterflies is about Canadian Dr. Fred Urquhart and his life time of research on the migration of monarch butterflies.  Spanning his 40 years of research, dedication, passion and a love for these small, delicate and beautiful creatures resulted in an inspiring film.  Monarchs have one of the longest migrations on Earth, spanning generations.  After a year long migration cycle the last generation is a super generation and is able to fly all the way to their wintering grounds in isolated mountain tops in Mexico.  When they showed the millions of butterflies fluttering about I felt like I could reach out and touch them.  The Flight of the Butterflies was an amazing film!

Jerusalem was a tour of one of the world’s oldest cities that is also the center for the world’s three major religions, Jewish, Christianity and Muslim.  It’s focus is on three young women who each speak of their different religions, their families, their special places, their Jerusalem and why they love their city.  Their stories bring to light how these religions are always in conflict yet live in and love the same land.  Jerusalem was such a poignant and thought provoking film that grabs a hold of your heart and opens up your heart and mind.

Discovery Place in Charlotte is a great place to visit whether you’ve got kids or are a kid at heart and love to explore, learn and discover the world around you!

Have you been to Discovery Place? What was your favourite part?

For more photos of my visit to Discovery Place visit Lady of the Zoos on Facebook!

One thought on “Discovery Place”